Great food from a legendary Birmingham restaurateur and sage words from a legendary New York Times columnist are just part of an exciting evening to honor imaginative and inspiring entrepreneurs at the “imerge’ Innovation celebration by the Economic Development Partnership of Alabama.

Kicking off the “imerge” event is keynote speaker Thomas L. Friedman, three-time Pulitzer Prize winning columnist for the New York Times. His latest book, Thank You for Being Late: An Optimist’s Guide to Thriving in the Age of Acceleration, is a bestseller.

The Innovation Awards ceremony will honor three companies and Jim Hudson, co-founder of the HudsonAlpha Institute for Biotechnology in Huntsville.

Networking opportunities abound at the Experience Alabama reception before the awards ceremony, and at the Celebrate Imagination after-party.

All will take place at the historic Alabama Theatre, starting at 4 p.m. Aug. 23.

Yellow Bicycle Catering is a perfect choice for this event, and not only because of its scrumptious scratch-made food. Sarris embodies the entrepreneurial spirit.

As a teenager, he emigrated from Greece to Birmingham in 1969 with his mother and a sister. The day after his arrival, he went to work for uncles at Greek-owned meat-and-three restaurants, first Niki’s Downtown and later Niki’s West.

Sarris went on to own two delicatessens and briefly was a partner in the legendary John’s Restaurant, which was run by Greeks for nearly six decades.

In 1982, he took over a fish wholesaler from one of his uncles. Sarris added a restaurant and built the Fish Market into a culinary institution that now boasts 400 seats and a retail seafood counter. Sarris also was a partner in a Homewood restaurant, Do-Di-Yos when it was open.

After opening and later selling an importing company named for his home village, he opened Kalimera, which imports products from Greece, Turkey and Spain. Kalimera means “good morning” in Greek.

Yellow Bicycle pedaled out of the Fish Market’s 15-year-old catering operation. It is named for the bicycles farmers used to transport fruits and vegetables from the fields to either market or home.

Greek immigrants and their offspring have dominated local restaurants for more than a century. Bessemer’s Bright Star, Alabama’s oldest continuously-operating restaurant, has been run by Greeks since it opened in 1907.

The majority of the Greeks who settled in metro Birmingham are from six villages within a 20-mile radius. Sarris is from the one of those villages, Tsitalia.

Sarris is related to many of Birmingham’s Greek families through blood and marriage. In fact, there are seven people living in greater Birmingham – all related – named George Sarris.

“We serve Southern food, but we ‘Greek it up’ a little bit,” he is fond of saying. Butter is rarely used in his kitchens; instead the cooks use the olive oil he imports from Greece.

Yellow Bicycle will serve food at both receptions. Here is what you can expect:

During the Experience Alabama reception, from 5 p.m.-6 p.m., servers will pass around Candied Bacon Lollipops. These are skewers of thick-cut applewood bacon coated with brown sugar, which caramelizes during cooking.

The station also features wedges, wheels and logs of domestic and imported cheeses, garnished with fresh fruit and served with house-made preserves. An assortment of crisp pita chips and freshly baked breads will accompany.

Or as Sarris translates it, “Welcome. Bring your healthy appetite.”

To see the “imerge” full agenda and to purchase tickets, click here. 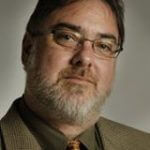 Note: Eric Velasco is a freelance writer who lives in Cahaba Heights with his wife and two children. He was a newspaper reporter for nearly 30 years, including 12 years at The Birmingham News. He is a regular contributor to Birmingham Magazine, writing about food and beverages. He has conducted oral-history interviews for the Southern Foodways Alliance.

← Who’s your Yoda? err.. mentor?It all starts with a customer →